Ethan Newberry writes, trains, and races as The Ginger Runner.  While tapering for his first 100 miler at the Cascade Crest 100 in Washington, Ethan caught up with Strava Pro Stephanie Howe in Chamonix, France as she prepared for this legendary ultra marathon. For photos of the race and trails surrounding Chamonix, visit stories.strava.com.

Stephanie Howe’s ultra running resume is full of first and second place finishes – a result of her natural talent, grit and tenacity, and good ol’ hard work and proper recovery. After finishing 3rd female and 25th overall at the 2015 Western States on June 27, Stephanie and I had a chance to discuss her training, recovery and attitude leading up to her first European ultra event, the Ultra-Trail du Mont-Blanc (UTMB) on August 28. From the lows of this year’s Western States to eating croissants (seriously, it made me hungry) and ripping up the trails surrounding Chamonix, Stephanie gives us a glimpse into the last few months of preparation before the race. 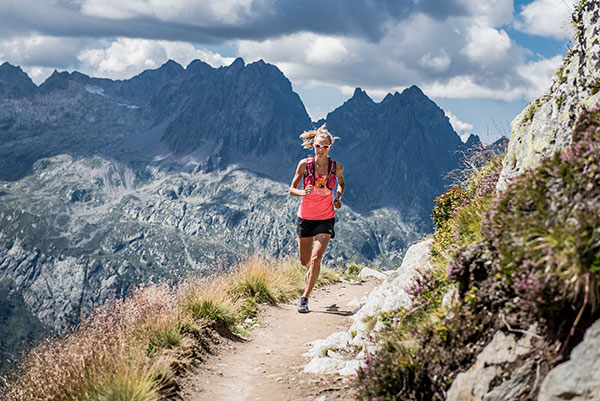 I’m always curious about how ultra runners get their start. Some just love spending time on trails in the forest. Others find respite in quieting their mind for hours. Or perhaps they’re in it to burn off the pizza and beer. Stephanie, however, found the long trail challenges almost by accident.

“I credit my husband Zach for convincing me to run my first 50k. I had just moved to Bend, and Zach, my boyfriend at the time, was running his first 50k – the USATF 50k Trail Championships. Not to be outdone, I signed up the night before the race.

I ended up suffering horribly and finishing second.

“I finished behind Kami Semick. I knew of Kami but hadn’t met her before. She told me all about her crazy, wonderful running plans for the year and said, ‘You should do these. You would be a great ultra runner.’ And that thought sort of hung with me. I contemplated it for exactly one year before running my second 50k. Same race, but this time I won. And I thought, ‘Yeah, maybe I should do these.’ “I’ve wanted to do UTMB for a few years, but I didn’t think I was ready until this year. I have taken a conservative approach to racing. I think too many runners jump up in distance too soon or over-race. I really have no interest in doing that to my body. I’ve been running for 5 years now and finished Western States twice, so I think I’m ready to make the jump to UTMB. I hope I am anyway.”

While I haven’t trained or raced in Europe yet, it’s races like UTMB that lure ultra runners from around the world with its world-class competition, beautiful surroundings, gnarly weather, semi-self supported requirements, insane course profile and delicious croissants (I figure I’ll be mentioning croissants throughout this blog now…still hungry). The race is 170km (~105 miles) with 10,000m of positive elevation change (32,808 feet of ups), only a handful of aid stations and a strict cut-off time of 46 hours, 30 minutes. Compared to a race like Western States, this is a dramatic step up in difficulty. I asked Stephanie how her preparation for UTMB differed from other ultras she’s completed.

“Oh man it’s so different! This past month I’ve been like, ‘Who is this person, and what have you done with Stephanie? “To back up, I’m a type A personality – type AAA according to my mom. Planning and structure have always been a big part of my preparation for a race. But I did a complete 180 for UTMB. After Western States, I needed to hit reset. I had a really tough race, both mentally and physically. My body recovered pretty well after 3-4 weeks, but my mind was not ready.

I really wasn’t able to comprehend pushing myself that hard again.

“The thought of running 100 miles was almost unbearable. I had no desire to put myself back into the dark place I had experienced for what seemed like an eternity at Western States. So I took it day by day, which is so unlike me. I tried to get back into normal training around late July, but it just didn’t feel right. I felt off, mostly just really emotional. I went on a run with my husband in July, and with just 4 miles left to go, I sat down on a log and started to cry. I had no idea what was wrong. I just didn’t think I could run 4 more miles, and I wanted to just sit and let it all out.

“I took it as a sign that I needed an even bigger reset than I thought. I arrived in Chamonix on August 1. My plans were to do a couple weeks of big training and then rest up before the race. Seeing that my body wasn’t really into running, I took a very different approach. I just went off feel. “The last three weeks I’ve woke up in the morning and asked myself, ‘What do you want to do today?’ Sometimes it’s been a long hike. Some days a run sounds nice, other days yoga.  A few days, I didn’t even leave my apartment. It’s been a very enjoyable experience and much different than my normal approach to a race. I feel totally relaxed and am truly having fun. Don’t get me wrong, I have done some great runs in the mountains, but they haven’t been forced. My longest run was 20 miles, and most are between 8-12 miles. And when I feel like stopping, I do. I go for a swim in a lake, or I scour the hillside for Ibex, or buy a snack at a refugee. It’s been really different, but in a good way.

“So saying that I’m ‘training’ for UTMB seems incorrect. It’s more like I’m familiarizing myself with the trails and the culture, which means getting up in the mountains, eating croissants, and drinking wine. It’s been pretty awesome – what have I been missing all this time!”

This training style piqued my interest. It allowed more freedom to just explore and have fun while allowing the body to recover. And really anything involving more wine and croissants (seriously, I think I have a problem here) sounds good to me. “I could choose to focus just on training and recovery, but where would that get me? I don’t think I’d be a better runner, and I really don’t think I’d be very happy. Moderation is key. And knowing that sometimes I can’t do everything perfectly is important. I try not to stress if I stay out with my girlfriends and drink too much wine. Those things make me human and keep me grounded. “Food is important to me, but I don’t subscribe to a particular diet. Diets are usually about what you can’t eat. I like to think about what I can eat. Eating for me is all about finding foods that nourish me and taste good. I vary what I eat depending on the season, geographic location, and my mood. And I love to try new things. Last night Zach and I went to this little French restaurant and had cow tongue. I didn’t actually order that on purpose – the menu was in French. But it was a culinary adventure, and I think it’s great to try regional foods when traveling.

“Race day nutrition is an area I’m really passionate about. I studied exercise physiology and nutrition and really enjoying working with athletes on how to fuel during races. You can’t really draw cause and effect because so many variables go into a good race, but I think my performance improved when I nailed race day nutrition. My plan on paper is simple: 300 calories per hour, mainly from Clif Shot gels, with a few blocks and bars for 100 mile races.

“One product that has been really helpful is the new Clif Organic Energy Food. There are two flavors I really love – pizza and sweet potato – because they are savory. It makes the world of difference when I can switch between sweet and savory. I’m can continue to fuel without getting overly tired of one flavor. And in 100 mile races like UTMB, that’s half the battle. I will also eat bits of food that look good at aid stations. And I plan to consume a fair amount of Coke as well.”

I know that in most of my ultra experiences, there will be a mental low where you have to battle the inner demons to push on.

Sometimes, a mental low point is directly correlated with some sort of calorie deficit or hydration issue. I asked Stephanie how she deals with these lows.

“I usually have a rough patch every race, but I’m really good at working through it. I stay positive and am really kind to myself. Sometimes I’ll even say out loud, ‘Good job Stephanie. You are moving really well,’ or ‘Run as best you can to that tree – then you can walk.’ Being positive can really keep your attitude from going south. Once you let your mind give up, the body follows.

At Western States this year I experienced a dark place that I’ve never been to before.

“I was defeated and could not pull myself out. So instead, I just kept going. It never felt better or easier, but I did not give up. It was the toughest mental battle I’ve ever had. My mind, body, and spirit were broken, but I persevered. That was one of the most awesome experiences I’ve had. To totally fall apart, but not let myself give up. Wow, I still shudder to think about that day. Crossing the finish line meant more to me after Western States this year than any other race.

“Moving forward, I know I can endure the suffering. And in 100 miles, it’s not a matter of if I’ll hit a rough patch, it’s when. But I’m ready and know how to get myself through. And if I can’t, well then I know I can just keep going and make it around that dang mountain!” My correspondence with Stephanie took place a few days before the start of UTMB. Neither of us knew what the future held, but she knew she was going to tackle it head on with everything she had. With UTMB behind us, I can report that Stephanie had an incredible race, finishing 8th female, 2nd American in 30 hours, 16 minutes, 28 seconds. While UTMB only recognizes the top 5 females on their podium (vs. the top 10 male finishers), they have stated that they will make the appropriate change for the 2016 running of UTMB. Needless to say, Stephanie pushed through what I can only imagine was a very tough day in extremely challenging mountains and finished insanely well on a global stage. I hope she devoured her pain au chocolate at the finish line and is bringing back many croissants (I have eaten 7 since you started reading). When asked what she plans on doing next, her answer was simple.