A Tale of Two Runners at the NYC Marathon

I have been running in New York City for over 15 years. Anytime I chat with someone in line at a coffee shop or mention that I run professionally, the conversation is the same.

“So have you run the New York Marathon?” they ask me, excitedly.

Then, the conversation comes to a halt. The NYC Marathon is a rite of passage among the NYC running community. And I have clearly unimpressed.

The New York City Marathon is the largest 26.2-mile footrace in the world. This year on November 1, over 50,000 runners from over 70 countries will begin their journey in Staten Island and run through the five boroughs to the finish line in Central Park.

A few of these runners will break the tape. Many will run PRs or qualify for Boston or simply earn the distinction of having completed the NYC Marathon, the largest marathon in the world. And regardless of whether they finish in just over two hours or six, their journey to the starting line and the months of preparation are not that different. Marathon training is the ultimate equalizer.

Whether you’re an experienced marathoner or new to running, you still have to balance life, running and work. We talked to two Strava athletes from opposite coasts to hear how they landed an entry in the NYC Marathon and how they’ve prepared for the race.

Gian-Paul Caccia is a native New Yorker and elite athlete for the New York Athletic Club (NYAC). After running competitively at Loyola University Maryland, he transitioned to the roads and qualified for his second Olympic Marathon Trials with a 1:04:55 at the 2015 Houston Half Marathon. The NYC Marathon will be a chance to get reacquainted with the distance before the 2016 U.S. Olympic Marathon Trials in L.A. next February.

Lindsey Wall is a California native who lives in Oakland, CA and works as a product manager at Strava. Although she’s a lifelong athlete and was a competitive coxswain at UC Berkeley, she’s new to running. For both Gian-Paul and Lindsey, this will be their second marathon ever and their first NYC. Both come with high expectations and a great deal of respect for the 26.2 miles.

Gian-Paul has run or walked nearly every step of the course. “I grew up on mile 18. Now I get to run with mentors like Meb [Keflezighi] in the city where my sponsor, my support, my team and my life are based.” For Lindsey, the race will be a brand new experience. “I met someone in France whose son ran New York eight years in a row. It’s neat to see how passionate people are about this race and how everyone just wants the privilege to run it.”

Lindsey took her chances with the lottery and landed a bid to New York. “If I’m going to focus on a marathon, I wanted it to be this race. It’s easy to make excuses – especially for me since I got married this year and had to plan the wedding. Everyone at the office was so excited that I won a lottery bid to NYC that I knew I couldn’t back out.” For Gian-Paul, the NYC Marathon wasn’t the plan. “I was going to do Grandma’s [Marathon], but the summer was a grueling time to train and very busy at work. I considered Chicago, which seemed like great timing for the Trials. Around Labor Day, I decided on the NYC Marathon.

I felt like I was cheating on my city all along, and I’m so excited it turned out this way.

Gian-Paul’s half-marathon time enabled him to bypass the lottery and secure an entry to the race (NYRR guarantees entry or reserves a select number of marathon spots for runners who meet time-qualifying standards.)

After having the nerve to sign up, perhaps the second hardest part of running a marathon is fitting in training and recovery. As seen on his Strava profile, Gian-Paul averages 75 miles a week, which usually includes a tough speed session and a long run. “In the summer, I was doing too many hard efforts: two workouts during the week, a long tempo run on the weekend plus two or three gym sessions. It was too many hard efforts. I started the week exhausted, and coming back two days later for another intense workout ended in failure and disappointment. And I have work. I can’t nap. I can’t double. I like the occasional boozy brunch. I had to ignore how other runners train to succeed on my own terms.” 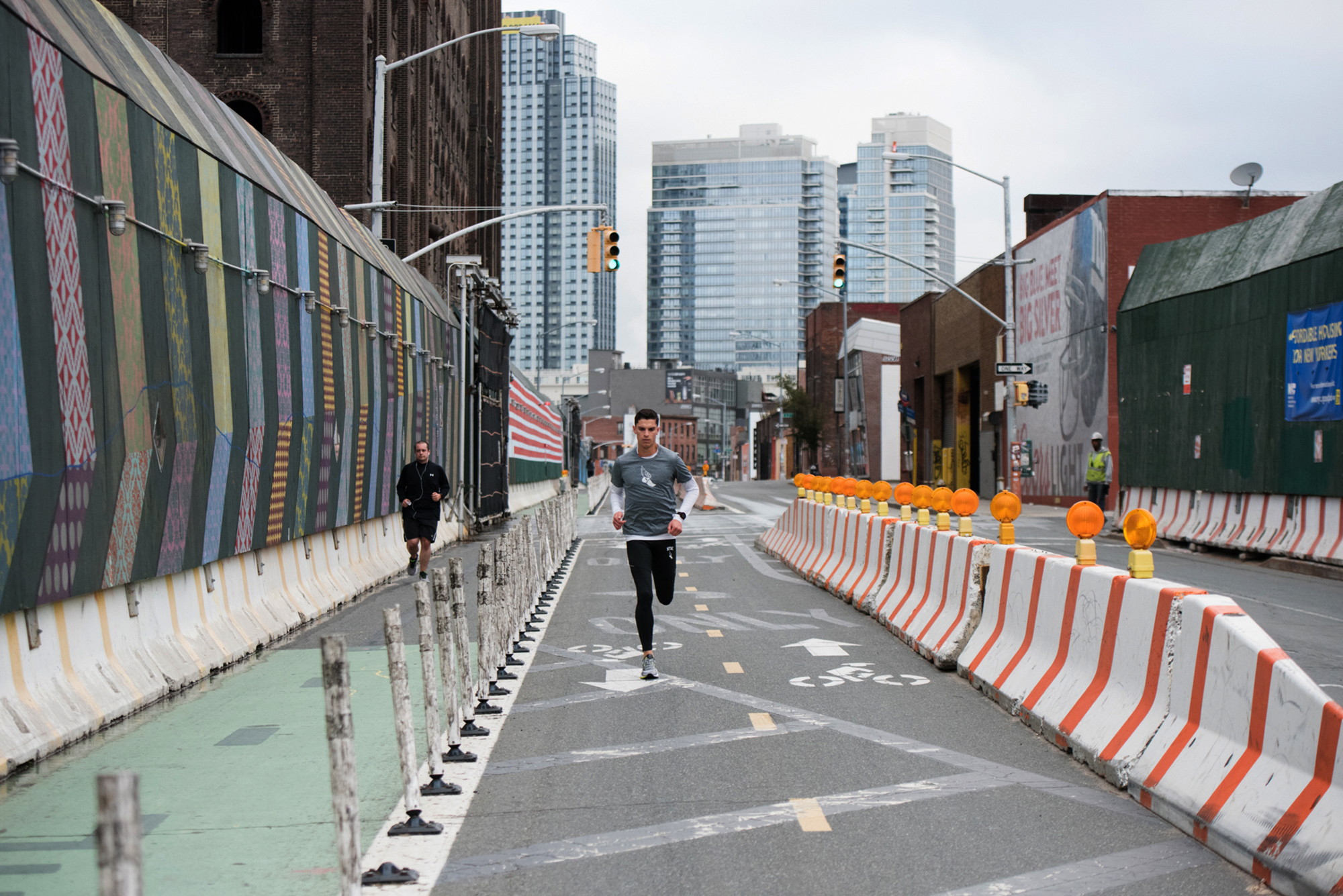 Gian-Paul still has good days and bad days, like all of us. “A few weeks ago, my schedule called for an easy 8 x 1 minute fartlek on Wednesday and a marathon-paced simulation run during the NYRR Grete’s Half Marathon the following Sunday. During the Wednesday workout, I couldn’t even hold 5:10 pace/mile for the 60-second segments and cut the workout short. However, the next Sunday I hit goal marathon pace easily, running 1:09:15 for the half marathon (5:15 pace) and ran the last 5K at a pace faster than any of the one-minute segments earlier in the week.

Some workouts just suck, but it’s best to stay mentally positive and have faith in your training. Like Gian-Paul, Lindsey is a morning runner. Her day begins when she “shockingly wakes up naturally at 6 a.m” to run. “This year, I’ve been training mostly where I live in Oakland. Getting to know routes in my neighborhood and seeing the town develop and change has been a great part of the training.”

Lindsey’s training involves four runs a week, averaging 35 miles total: 3 easy or moderate runs Tuesday through Thursday and a long run on the weekend. She started her taper after completing a 20-miler 3 weeks before the race.

Both Gian-Paul and Lindsey used vacations to refresh their running and get excited for the race. “My honeymoon was in September in France and Spain. I loved using running to see new places you don’t find by sightseeing,” Lindsey reflected. “My husband doesn’t run with me, so it became my own passion to enjoy. The best day of training was a 16 miler in St. Sebastian in Spain. I was able to just explore the city by foot.”

It’s important to listen to your body and not get obsessed with the data and your pace. Gian-Paul reignited his running in Vegas. “I went to Las Vegas on Labor Day to forget about running and clear my head. It made all the difference. I am not sure where it hit me–a pool party?–but I remember thinking, ‘Maybe I should run New York!’ I went on just one run during the trip, alone in the morning. With people walking home from a night out and the desert in the background, it helped me remember how much I enjoy training to balance out my life. I don’t have much time with my job and commitments, so whatever else I am doing has to be fun.”

With race day fast approaching, both Gian-Paul and Lindsey manage to balance life, running and work. “I allow myself one or two nights out to break up the work/run life and forget the nerves,” says Gian-Paul. “

I refuse to avoid fun, my friends and my life.

The night before the race is Halloween. I won’t nervously sit in my apartment all night. Maybe I will wear my bib and short shorts as a costume to remind me to head home at some point!” For Lindsey, marathon weekend will be short but fun-filled. “I am flying out on Friday and head back to San Francisco the day after the race. My dad is coming with me. We’ll visit old friends and maybe see a show. My dad was planning some elaborate three-course dinner the night prior – he clearly doesn’t understand fueling!”

While these two runners have drastically different goals and training regimens, they’ve both managed to balance a few crazy months of preparation. On Sunday they’ll both toe the line with thousands of other athletes from around the world. Gian-Paul is setting out to “beat his only other marathon time of 2:22:30 (from the 2012 Olympic Marathon Trials) and sneak under 2:20 if the stars align.” Lindsay’s biggest goal is to finish. “It would be nice to PR. Last year I ran a 4:02, so it would be nice run under 4:00 or PR by at least 10-15 minutes if I feel good.” Being in this city it’s hard not to set your sights on running the marathon one day. It’s a few days from the start and the energy in the air is palpable. I can’t wait for the day I’m asked about the NYC Marathon and proudly answer that stranger back saying, “Why yes, I have. Have you?”

Share your NYC Marathon experience below. And if you’re racing this year, join Gian-Paul, Lindsey and the other 750 Strava athletes in this race community.